The history of Pretoria Caravans & Outdoor is a storied one. In 1968 JP Du Plessis and Chris Conradie owned and operated Hospital Garage as young men. Wanting to take their families on holiday to Mozambique they decided to start trading in caravans alongside motor vehicles & fuel.

It was certainly the right decision as the caravan market entered a boom and the two soon needed to open a bigger premises. Thus, Caravan Mecca & Outdoor Living was born, trading in caravans of all shapes & sizes including Slipstream, Camp Pride, Voortrekker, Skipper & Venter caravans and trailers.

By 1970 Gypsey caravans were added to the mix and they began trading as Gypsey Caravans. In 1993 Jurgens approached them with an offer to pick up a Jurgens franchise. There was a conflict, however, with the current CI caravans franchise agreement and in order to solve the problem a new showroom was added to cater for the Jurgens caravans. Later another premises was added to the group operating the Sprite Franchise namely, Sprite Wonderland.

Glenda-Ann Colley (JP’s youngest daughter) then joined Chris Conradie to run the new Jurgens showroom business. After moving all the businesses to a larger premises Gezina, the Pretoria Gypsey, Pretoria Jurgens and Sprite Wonderland companies were amalgamated into one business in 1996 – Pretoria Caravans cc.

Pretoria Caravans went on to trade as one of the country’s largest caravan dealerships and camping goods shops for many years. In 2010 tragedy struck as Chris Conradie passed away, striking a blow to both Pretoria Caravans & Outdoor and the caravanning community where he was much loved. Adri Conradie had joined the sales team a few years prior and then stepped into Chris’ role as the new Dealer Principal.

The caravan industry struggled through a few years of flux resulting from changes in ownership of the country’s largest caravan manufacturer, Jurgens CI. Pretoria Caravans rebranded as Pretoria Caravans & Outdoor during this period. Then the Covid-19 pandemic hammered South Africa and the world. In 2020 JP Du Plessis passed away, his passing was felt tremendously by all whom had encountered him in his celebrated life.

Despite all this Pretoria Caravans has persevered and has continued to offer the best caravans camping gear and service to its clientele. It is now that Adri Conradie has decided to retire and spend her golden years enjoying travelling and camping with the community she has served for many years.

Michael and Sukie got their start in the fiberglass industry manufacturing moulds in Pretoria, from there they opened the successful Caravan Fitment Centre and for the last 23 years they have honed their expertise repairing, modifying and rebuilding caravans, trailers and even boats as one of the largest workshops in the industry, and all the while operating a farm too! Recently, they have begun to import and distribute caravan goods and parts such as the Enduro caravan movers in South Africa, and you can be sure there are more things to come. After a long history of working together with Pretoria Caravans & Outdoor installing air conditioners and other specialised installations, Caravan Fitment Centre moved into offices neighbouring Pretoria Caravans & Outdoor which has further solidified the bond between the two companies. They have grown from strength to strength over the years and have a wealth of experience to lend to the Pretoria Caravans & Outdoor team.

Now, Pretoria Caravans & Outdoor has a new chapter to begin with Glenda-Ann Colley and Michael Barwise at its head. There is a sense of excitement in the air and a great deal of motivation fuelling many exciting changes and planning for the future of this camping and caravanning institution. Watch this space! 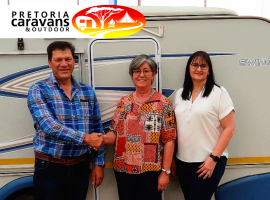